According to the Wall Street Journal, “Surging demand for warehousing close to major ports driven by the growth of e-commerce and the flood of container imports hitting U.S. shores is making storage space harder to find and more expensive, adding new stresses to already strained supply chains. The article went on the say, “The ports of Los Angeles and Long Beach together handled more than 4.3 million container imports, measured in 20-foot equivalent units, in the first five months of this year, according to research firm Beacon Economics. This was up 47.1% from the same period a year ago and 29.2% more than in the January-May period in 2019. At Southern California’s Inland Empire, the first two quarters of this year were among the busiest in the market’s history, according to commercial-property company Jones Lang LaSalle Inc. Vacancy rates in the second quarter of this year fell to a record low 1.7%, JLL said.” 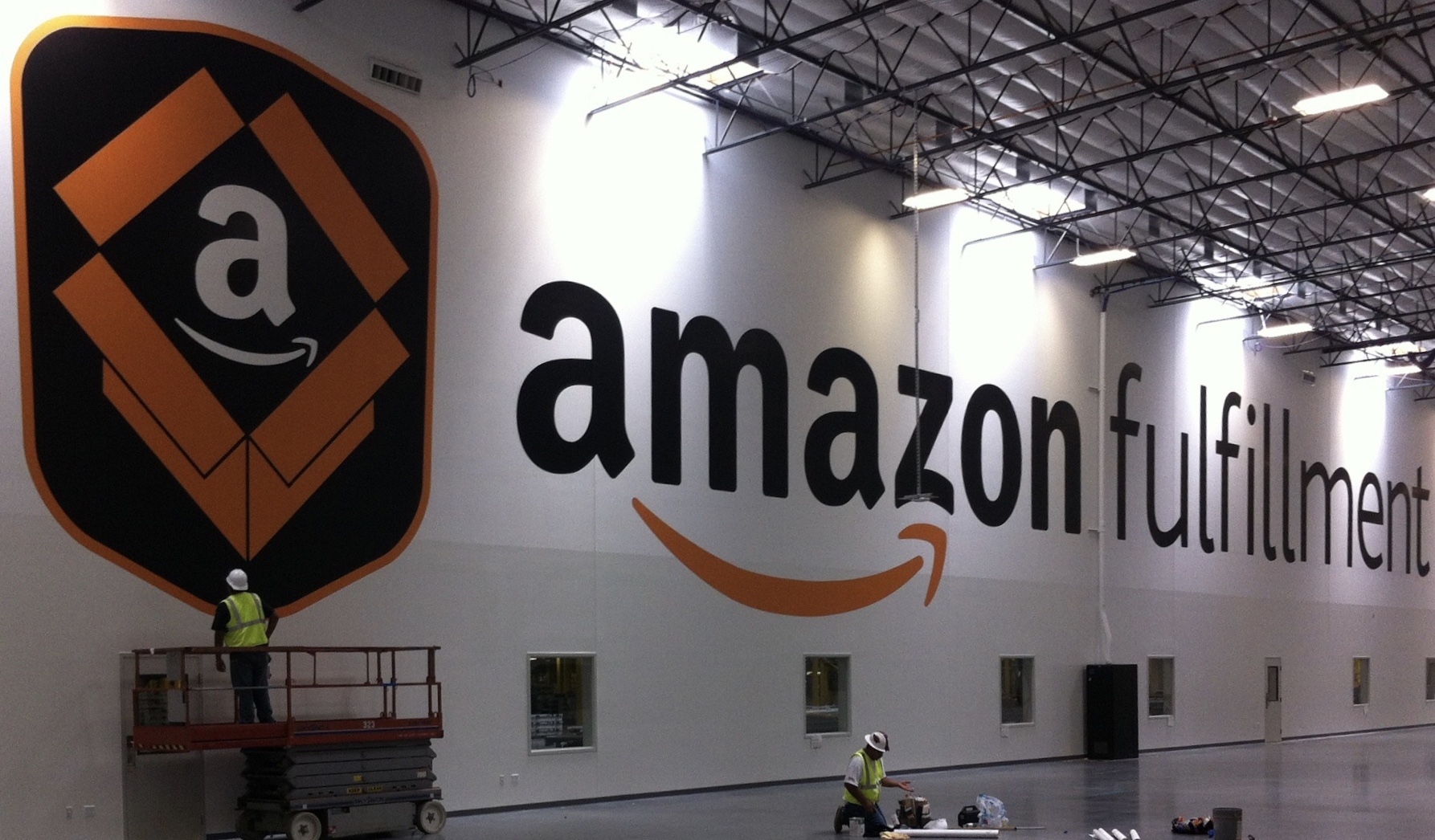 With all of this in mind, the warehouse and distribution center building boom continues in Southern California. The demand and popularity of these facilities introduces unique challenges and opportunities for commercial construction and their sub-contractor partners. The numerous experiences of Sign Specialists Corporation in this market sector have resulted in a tremendous amount of accumulated wisdom that we are able to pass along to our clients.

The vast majority of interior signs (i.e., egress, restrooms, ISAs) are required for code requirements and necessary for the General Contractor to pass inspections. Room IDs for exterior doors leading to electrical, pump or mechanical rooms will also be added as they are necessary for code compliance. Likewise for building address numbers. Unless the architect calls for them in the plans, interior dock numbers are not code required and tend not to be in the GC’s scope of work because they are not required to pass inspection. Exterior signage such as parking/site signage is always included as part of the asphalt contractor’s scope of work. Tenant signage comes after the GC has finished the shell of the new build therefore, dock numbers are rarely included in our scope as they are not required for inspections. Once a tenant is occupying the space they will want branding signage for awareness and to advertise and promote themselves. In addition, they will usually require wayfinding signage for transport drivers. 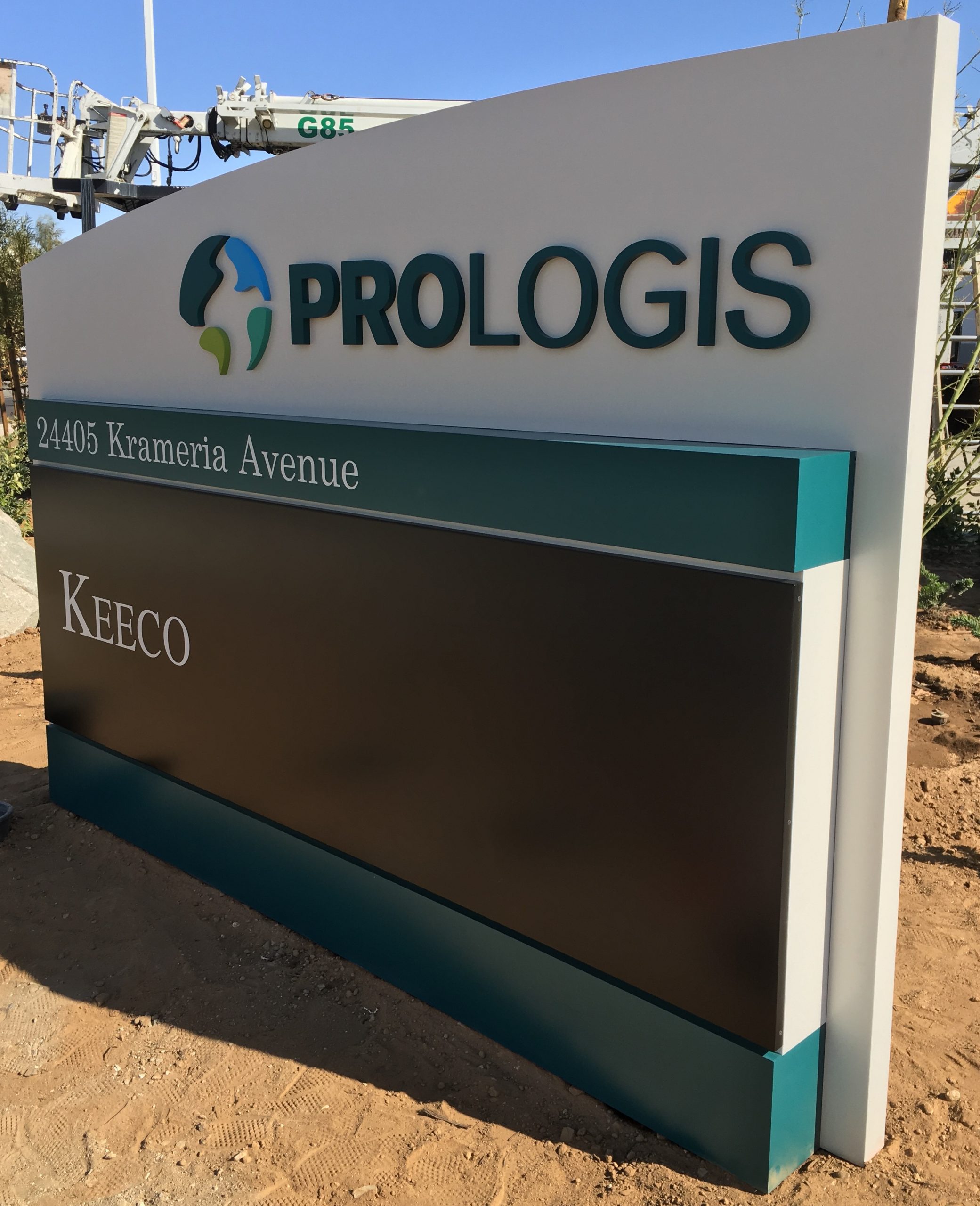 Nine out of ten times, the architectural floor plans will call out for signage. However, Room IDs are rarely called out. Through experience we have learned they will need to be provided. Each architectural firm has a standard key note system, which tends to remain the same, with variations in the building lay outs.

It bears repeating that all buildings require signage to pass inspection. The only differences (mentioned above) which are not always in our scope, is wayfinding signage for deliver drivers, and the dock numbers. New builds always require address numbers, whereas existing buildings rarely do. 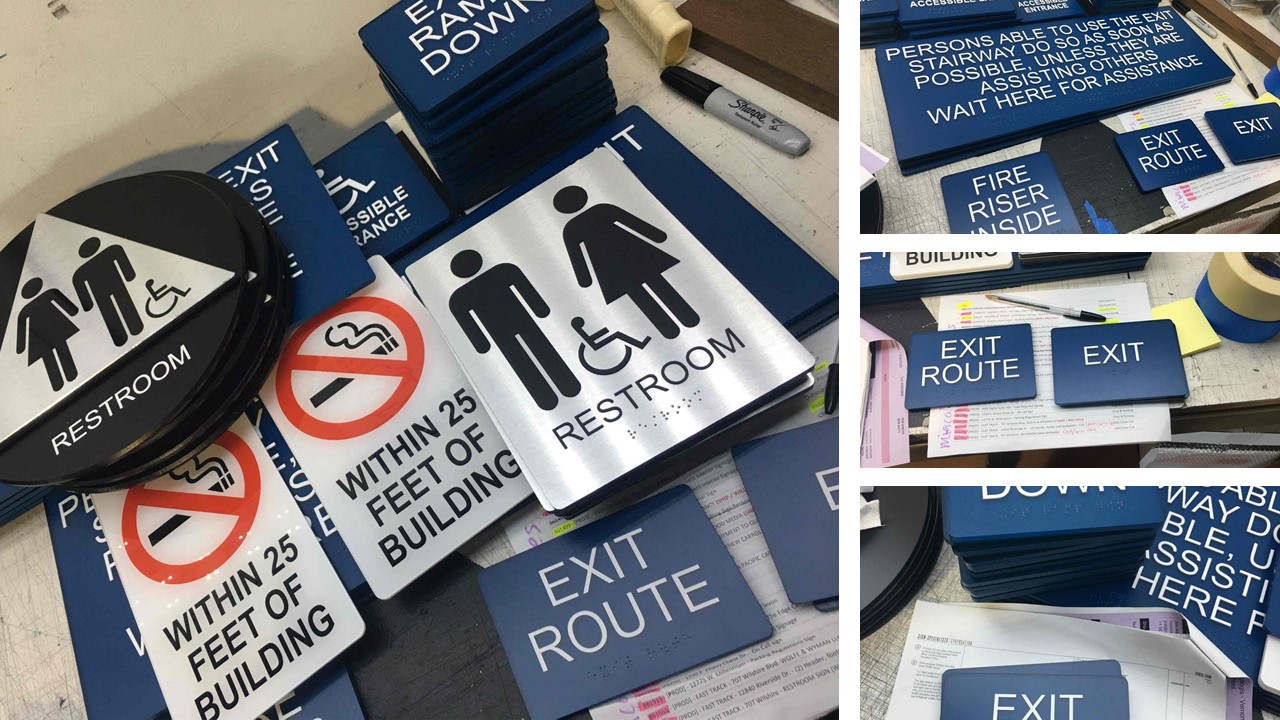 Typical sign types required for both code and regulatory compliance include:

Common errors are often made by inexperienced sign companies on these projects. For instance, exterior room IDs, will be made from acrylic with raised (tactile) lettering and braille. To perform better and last longer, these signs should be aluminum and they need to be mounted on the doors. So Cal Edison requires the building address on exterior electrical rooms. Interior signage is commonly acrylic unless called out otherwise or as decals.

When awarded the dock numbers as part of the scope of work, some must be Flat Cut Outs while most require an aluminum back plate with vinyl numbers. 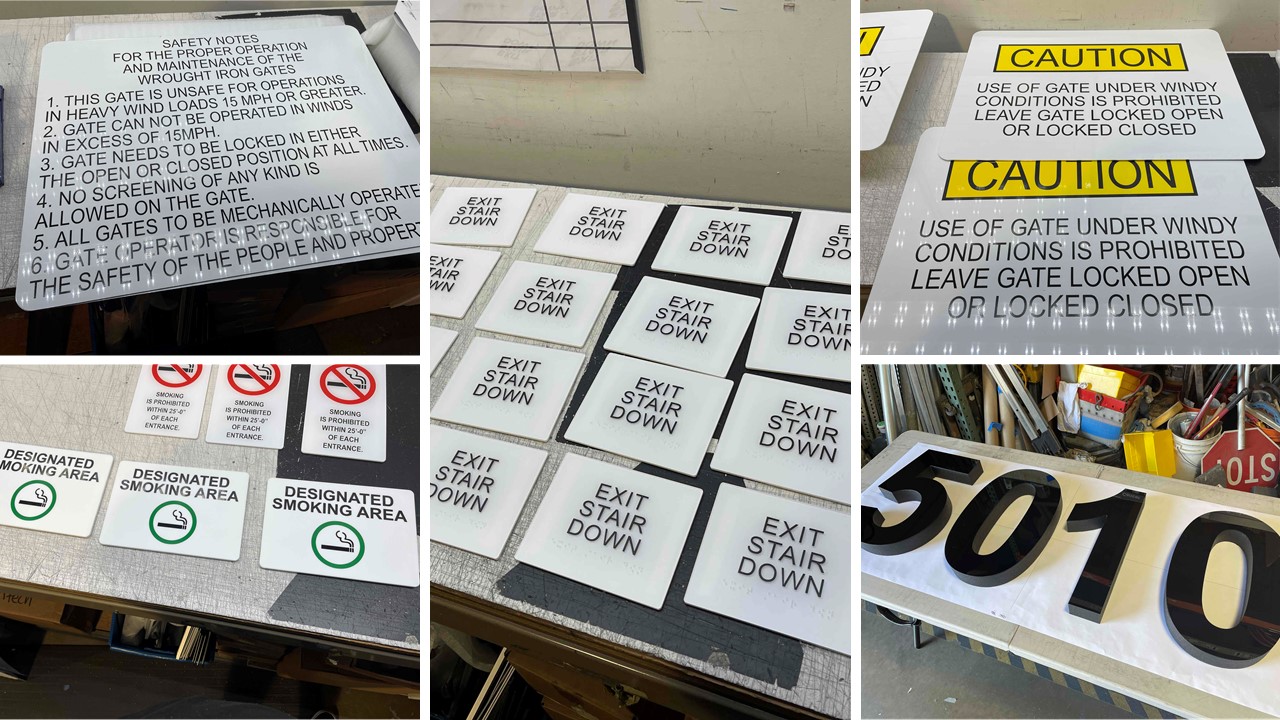 Installers average five signs per hour for code required signage which accounts for walking door to door in the vast space. Additional rental equipment fees will apply for building address numbers and when illuminated and we must confirm if we are mounting above or below the roof parapet as a mounting raceway may be required.

If dock numbers or no idling signs are included in our scope of work a lift rather than a ladder is best. For aesthetic reasons, signage installed on glass in the store front or office area requires a vinyl backer so the double-sided tape isn’t visible.

Sign Specialists Corporation has completed a significant number of these projects. With this experience, these project tend to be straightforward and rarely is there a hidden surprise. Our scope is clear, we know what we need to provide to get the job done in a timely and efficient manner. 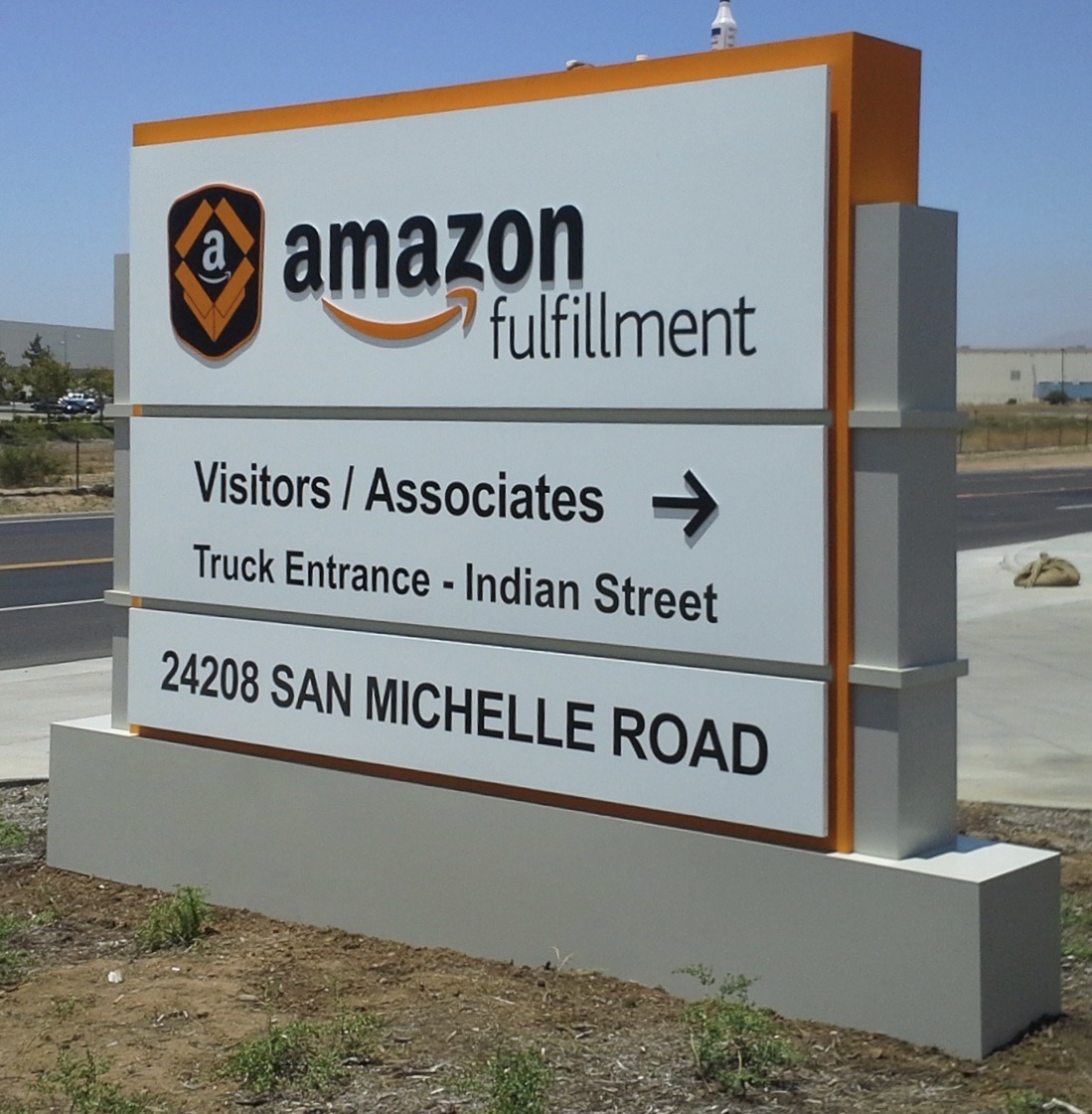